The Thai stock market remains in the radar of foreign investors and the value of their holdings in Thai stocks is solid proof. At the end of August 2021, foreign holdings of Thai stocks soared 35.5 percent year-on-year to over USD 157.39 billion (THB 5.09 trillion), the highest level in three years and the second highest in ten years1.

Foreign ownership surged USD 41.13 billion (THB 1.33 trillion) while the SET Index increased by 25 percent from August 2020 to August 2021. Due to the decline of the SET Index from the end of August 2021, foreign holdings fell marginally to 26.63 percent of market capitalization at end-November 2021 from 27.16 percent.

Notably, foreign investors from the United Kingdom, Singapore, and Hong Kong maintained their position in the top three holding the highest value in Thai stocks as of August 31, 2021.

The SET Note Volume 10/2021 report on foreign investors’ holdings in the Thai stock market, which report is based on information from the shareholders’ registration book closing, corporate actions and follow-on offering of 756 listed companies reflects a combined market capitalization value of USD 578.23 billion (THB 18.7 trillion) at the end of August 2021.

The report showed that investments in initial public offerings (IPOs) and a rise in stock prices contributed to the USD 41.13 billion increase in foreign holdings.

Foreigners invested USD 2.84 billion (THB 91.83 billion) into IPO shares allocated by 39 newly listed companies on The Stock Exchange of Thailand (SET) and Market for Alternative Investment (mai) in the 12 months prior to August 2021. The rest was attributable to an increase in the SET Index, which raised the value of shares in their portfolios.

As of August 2021, the Thai bourse attracted investors from 124 countries, up from 116 the previous year. While some were returnees, others were newcomers who focused on big-cap and newly-listed stocks.

Thai stocks held by the top ten foreign investors amounted to USD 147.5 billion (THB 4.77 trillion), accounting for 93.7 percent of all foreign stock ownership. The rankings of the top seven foreign investors remained unchanged from the previous year: the UK, Singapore, Hong Kong, Switzerland, the US, Japan and Mauritius.

Investors from the UK held USD 51.58 billion (THB 1.67 trillion), accounting for 32.8 percent of total foreign holdings. Their portfolios were big-cap stocks in the SET Index and benchmarking indexes like the MSCI Thailand Index. The combined portfolios of investors from Singapore and Hong Kong was valued at USD 48.55 billion (THB 1.57 trillion) or 30.8 percent. They mainly comprised stocks in the Technology Industry, both in the Electronics and ICT Sectors.

Additionally, as a result of the soaring prices of electronic stocks, Taiwanese investor holdings rose from 11th place a year earlier to the top ten list.

In terms of the Industry Group, the report showed that foreign holdings in the Technology Industry Group accounted for the biggest amount, totaling USD 40.51 billion (THB 1.31 trillion), a 96-percent jump as the Industry Group Index rose 58.9 percent. The Industry Group moved up from fourth place a year earlier. That was unsurprising owing to the global technology stock boom amid the COVID-19 pandemic.

However, the Service Industry Group’s foreign holdings ranking changed notably; while it was the champion in 2020, it fell to fourth place in 2021, attracting USD 24.18 billion (THB 781.94 billion) in foreign holdings, a slight increase place of 2.9 percent year-on-year.

In conclusion, the data showed us that Thai stocks remain attractive to foreign investors, despite the fact that details of their portfolios may be altered and the prevalence of the new COVID-19 strain. 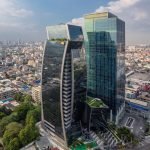 The Stock Exchange of Thailand Group: a one-stop shop for traditional and digital assets

The Stock Exchange of Thailand Group: a one-stop shop for traditional and digital assets As...